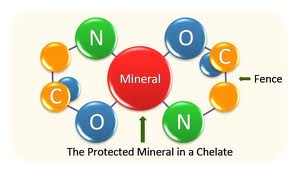 What are chelated Minerals?

The figure show a schematic view of an organically chelated mineral as might occur in fruits and vegetables that are grown on soil that has the rich mixture of organic and mineral components. There is a cage that holds the nano-mineral in the center. The cage is a complex organic molecule that allows the nano-mineral (such as magnesium) to appear larger than its actual size. This makes it easier to find by the cells that are in need of such minerals.

Are chelated minerals of this sort easy to find in nutrition? 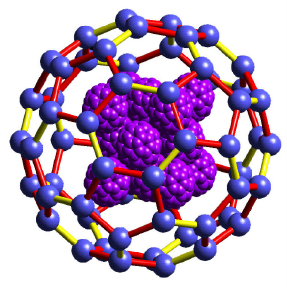 The figure shows a schematic example of a water-chelated mineral.  The blue dots on the outside cage represent water molecules attached to each other in buckyball fashion.  The purple mass in the center represents mineral food particles, which can be single molecules or a complex grouping, that might be a food particle.  We note that there are hexagonal water cluster components in this buckyball.

When a cell encounters a water-chelated mineral as above, it finds it that it can more easily recognize the mineral inside the cage, because of the presence of these hexagonal water clusters in the cage.  Indeed, the cell has a simple rule for deciding if a component floating by is alive or not.  If the component has many hexagonal water clusters around it, it is perceived as being alive.  If it has few such clusters, it is considered to be dead and is treated as something the immune system should eliminate.

How do we make sure that we have the right mixture of water chelated minerals in our nutrition?

The old traditional ways of doing this was to consume all sorts of raw sea food and sea vegetables. This worked fine as long as we lived in coastal societies, where raw ocean products were easily available. However, as civilization moved away from the coasts, this method of supplying water chelated minerals and organic nutrients became more problematic. Because of the spoilage that occurred when moving these resources over large distances on land, societies began cultivating produce on land far from the ocean. The mineral profile on interior land is sufficiently different from that of coastal land, and the nutritional value of produce was decreased. (An exception to this would be in the incidences of societies living near volcanic eruptions.)

Now, EssenceSea offers a range of water chelated ocean mineral products to make up for dwelling so far away from the Ocean.